Entertainment at the 2019 California HR Conference

Southern California is the entertainment capital of the world – and we here at the 2019 California HR Conference take this to heart. Experiencing the California difference at CAHR19 means more than:

“Experience the California Difference” also means more than adding avocados to everything, but we would if we could.  (via GIPHY)

It means all of these things – and so much more. In the immortal words of Tupac Shakur, California loves to party – and at CAHR19, we keep it rockin’. At the 2019 California HR Conference from August 25-28 in Long Beach, we’re expanding our entertainment offering more than ever to include more networking, more laughter, and more enjoyment. You work hard – and you’ll definitely be exerting energy to learn a ton during each day of CAHR19 – which is why we’re intent on giving you a great time, even between learning sessions.

From DJ Noble spinning the best tunes throughout the day, to a new Comedy show to kick off CAHR19 on Sunday night, more Meet to Eat outings, and a brand-new Music Show on Tuesday Night as the grand finale – this year’s entertainment is guaranteed to impress and delight, and most importantly, keep it rockin’ California-style.

Our faces when we heard the CAHR19 entertainment headliners. (via GIPHY)

You heard us right – we’re hosting two shows at CAHR19 this year! Our comedy night at CAHR18 was such a blast (did anyone else laugh so hard they literally cried? #guilty) that we knew we needed to bring comedy back for Sunday night in 2019. But we’re not stopping there. We’re also adding a brand-new Music Show on Tuesday night with a musical supergroup who will rock the Main Stage. Are you excited as we are? Yes? Let’s introduce you to our CAHR19 entertainment!

The man, the myth, the legend. Since his debut many years ago at CAHR15, DJ Noble has become the most beloved emcee and coveted DJ at the California HR Conference. He brings joy with him everywhere he goes (let’s just say, impromptu hallway dancing is a real possibility at any hour of the day) and we love that his music embodies the excitement, buzz, growth, and blossoming potential attendees experience at the conference.

While we keep the music down during concurrent sessions, DJ Noble brings the hype all the way up during his Main Stage introductions. DJ Noble curates and cultivates the musical vibe of CAHR19, and while he can keep bringing the hits (and B-sides) we love without any help from us, he’s always open for requests – so be sure to stop by the DJ booth and say hi!

When he’s not rocking the California HR Conference, DJ Noble spins all over Los Angeles County and the West Coast – but did you know Henry Noble is also an actor? Noble most recently appeared in the 2018 film The Competition. Check out his acting projects here. 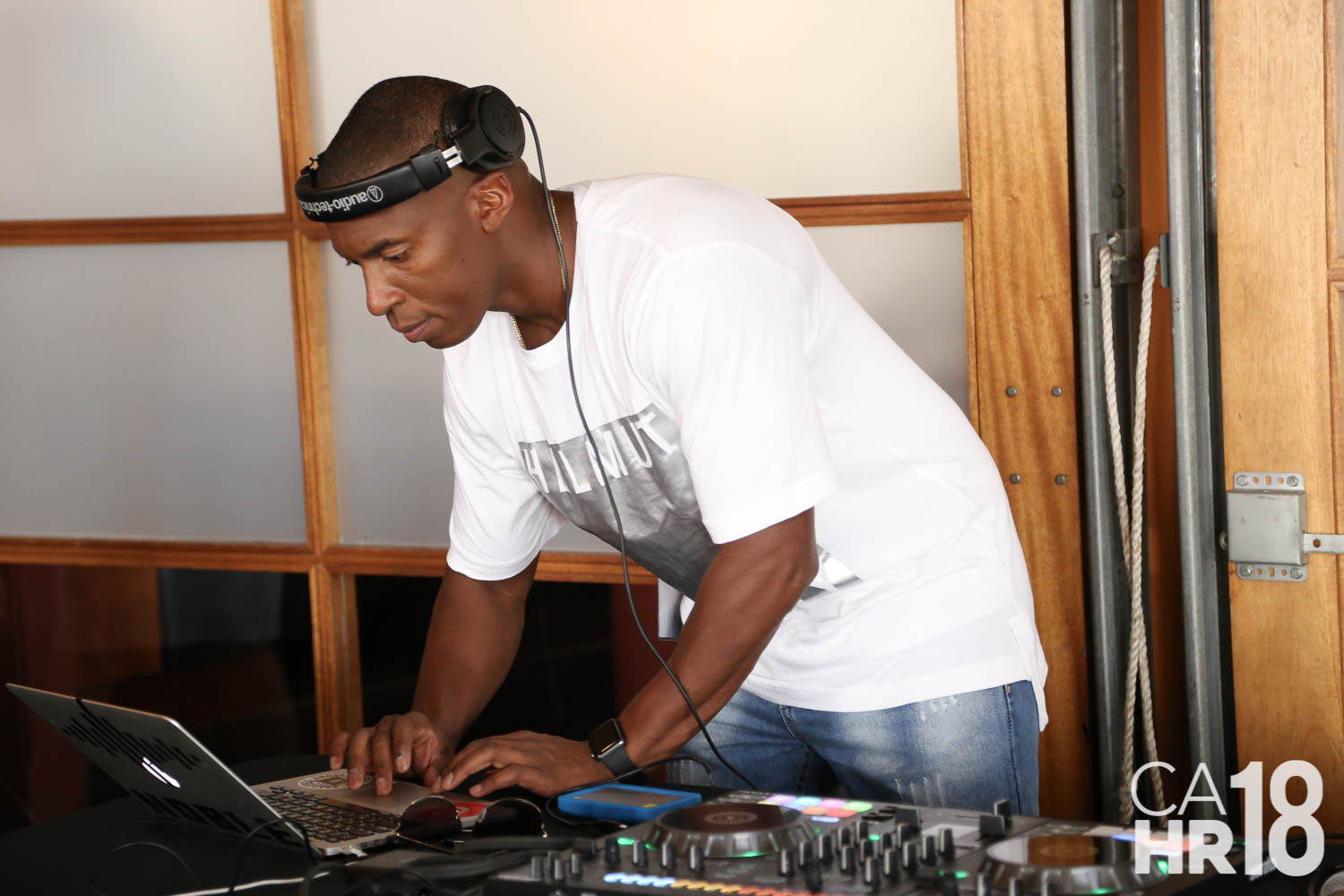 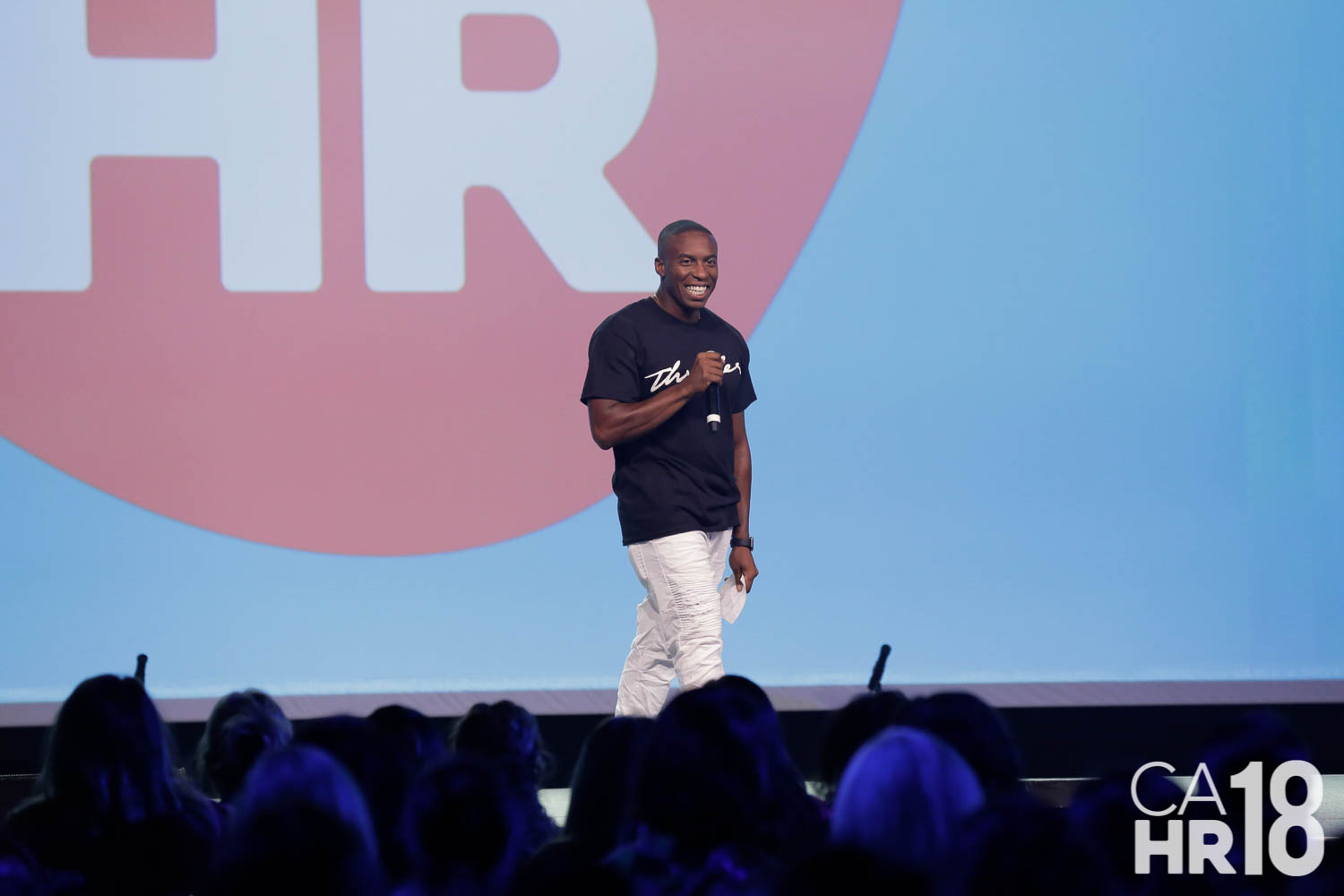 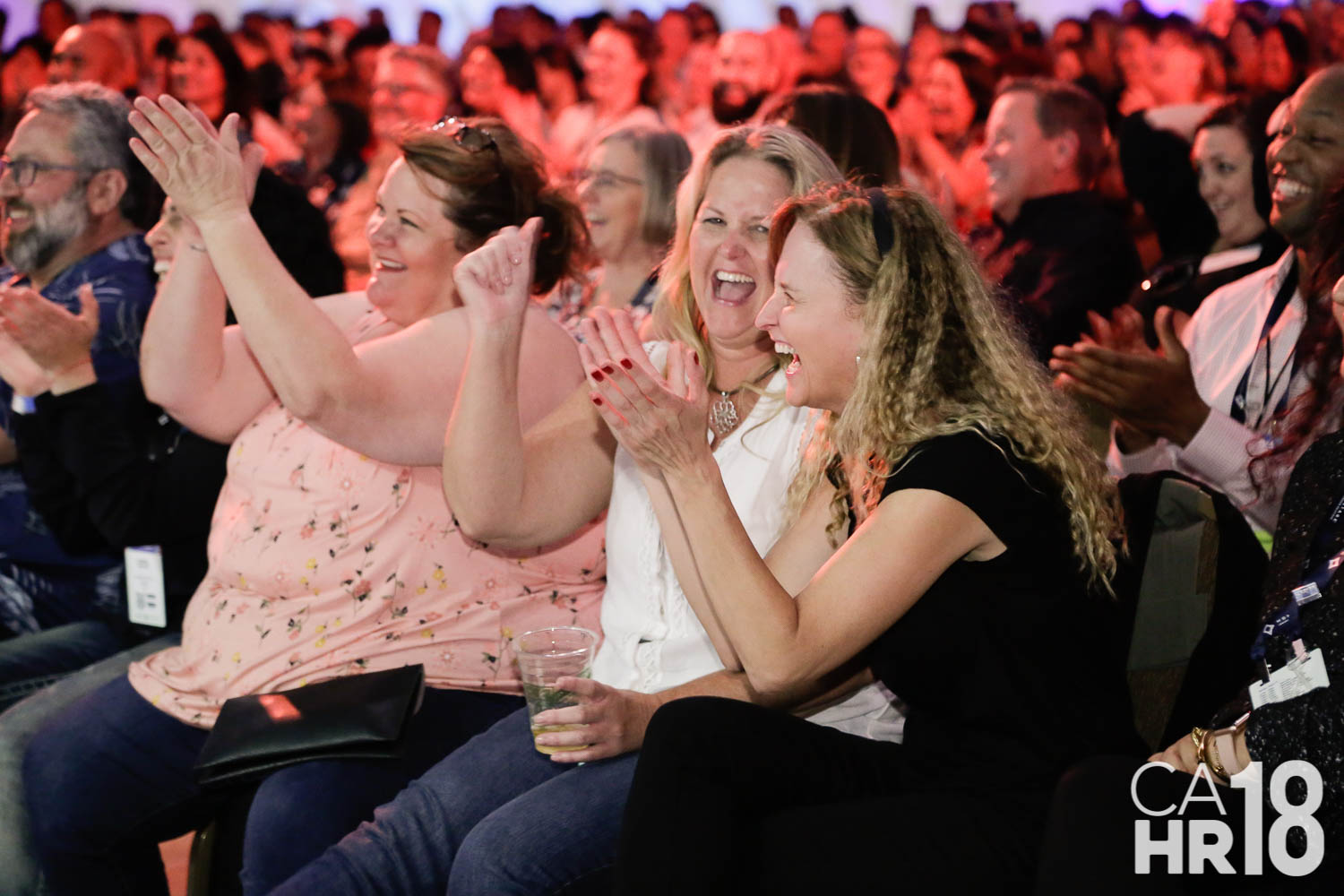 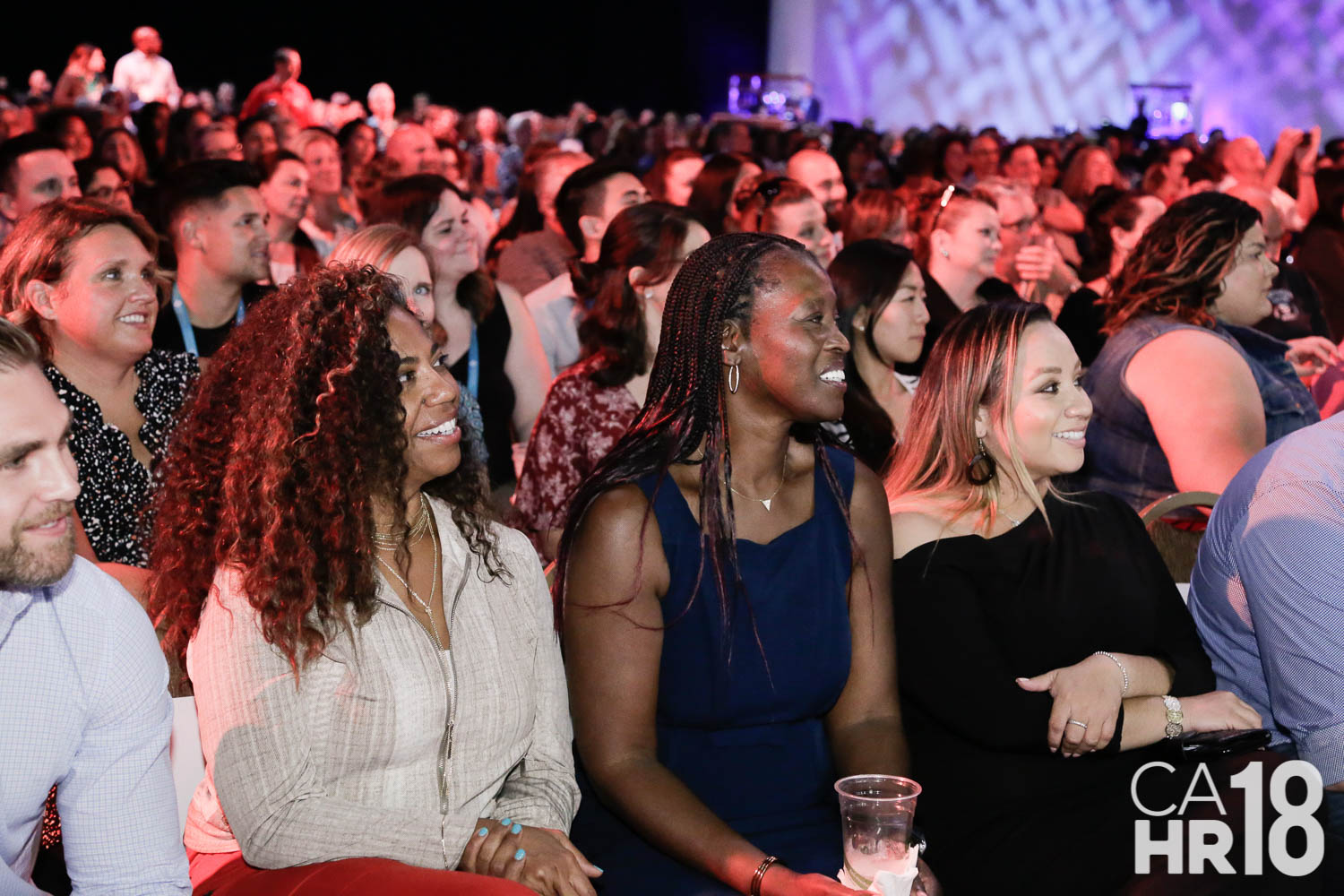 Stanley from The Office improving his quality of life with a good chuckle. (via GIPHY)

Time spent laughing is (usually) not wasted. As we mentioned last year, laughing provides many valuable physiological and psychological benefits! From stress reduction to increased serotonin, to general higher quality of life, there are plenty of reasons to find time to laugh every day. For the next few months we recommend you tap into what you find hilarious – subscribe to videos of clumsy animals on YouTube, or whatever tickles your funny bone – and make sure you don’t miss the Sunday Night Comedy Show at CAHR19 featuring (drumroll, please)… 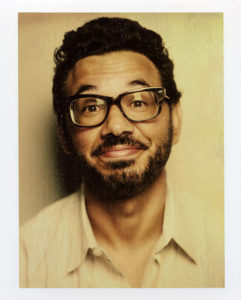 Get ready to welcome Al Madrigal to the CAHR19 Main Stage! With over 18 years of experience in standup, Al Madrigal has parlayed his talents as a comedian into successful off-stage careers as an actor, correspondent, and podcaster. He’s led a star-studded career in the entertainment industry alongside some of comedy’s greatest like Martin Short. In the summer of 2016, he began production on the Jim Carrey produced Showtime series I’m Dying Up Here, where he stars alongside Melissa Leo as a series regular, and takes his comedic talents behind the camera as consulting producer. Since 2011, Madrigal has filed regular correspondent pieces for the Emmy Award-winning The Daily Show.

In 2013, Madrigal starred in his first hour-long stand-up special – you may have seen it – called Why Is the Rabbit Crying on Comedy Central. He has been seen on Conan, The Tonight Show, The Late, Late Show, @Midnight and Jimmy Kimmel Live. In 2015 Madrigal released his award winning and critically acclaimed docu-comedy Half Like Me. His newest standup special, Shrimpin’ Ain’t Easy premiered May 5th, 2017 on Showtime.

As more and more people latch on to the power of a well-told story, so comedian Al Madrigal becomes more and more popular. With good reason, as The Daily Show’s “senior Latino correspondent” is perhaps the most hilarious storyteller to hit the stage since David Sedaris. His true-life tales have been featured on The Tonight Show, Conan, The Late Late Show with Craig Ferguson and Jimmy Kimmel. And if that’s not enough for you to get excited to see him live at CAHR19, he was named Best Stand-Up Comedian at the HBO U.S. Comedy Arts Festival in Aspen and recently taped an hour special for ABC and Univision that won the 2015 “Storyteller Award” at the Mixed Remixed Festival in Los Angeles. Now Madrigal, the man who “will make you howl until you spit expensive mineral water from your nose” (New York Post), headlines the Main Stage at CAHR19. Make plans to attend CAHR19 on Sunday night to enjoy our first entertainment show, after our afternoon learning sessions!

Get Ready to Sing, Dance and Rock Out at the Tuesday Night Music Show

This year’s annual Tuesday Night Event will be a brand-new concert show for CAHR19 Attendees. Get ready to experience live music featuring dozens of top-10 hits! We have just one piece of advice: if you feel led to dance at the Music Show, don’t be self-conscious. Go all out! If Michelle Obama (and Jimmy Fallon, Big Bird and Mr. Snuffleupagus can bust a move, we believe you can too – and we believe you’ll rock to the beat at our Tuesday Night Music Show!

If you were alive in the 1990’s, you’ve definitely heard (and potentially grooved, roller-skated, or sang in your car to) the work produced by these musical masterminds headlining our Tuesday Night Music Show: Ezra Ray Hart!

The supergroup Ezra Ray Hart features Mark McGrath of Sugar Ray, Kevin Griffin of Better Than Ezra, and Emerson Hart of Tonic. Together, the members of Ezra Ray Hart have sold over 10 million albums in the US and have 18 top ten hit singles on the US charts, including five number one hits. With all of this talent together on stage, this supergroup is a triple-threat crowd favorite that delivers hit after hit. You won’t want to miss this energetic night of live music with 3,000 HR friends dancing and singing along to some of the best hits of the ’90s and early ’00s. And just like last year, we’ll open the doors early for pre-show mingling & networking, air hockey, ping pong, no-host bar and plenty of DJ Noble tunes!

Take a listen to some of the top hits you can expect from Ezra Ray Hart at CAHR19.

Get to know the Band

Featuring the top talent from three stellar, energetic bands, Ezra Ray Hart is bringing a powerhouse of musical presence to the CAHR19. Get to know the names behind the hit songs you know and love.

Mark McGrath is an ever-present pop culture personality known for a string of top 10 hits and several multi-platinum albums as the lead singer and songwriter for Sugar Ray. With his first hit single “Fly” Mark McGrath set the stage with new sounds that pop rock audiences had never heard before. He went on to land hit singles “When It’s Over,” “Someday,” and another number one smash hit with “Every Morning.”

Kevin Griffin of Better Than Ezra

Known as the lead singer and guitarist for alternative rock band Better Than Ezra, Kevin Griffin has released 8 studio albums including platinum album, Deluxe. WIth his number one hit “Good” and top 10 hits including “A Lifetime” and “Juicy,” Griffin brings an energy like no other with his unfailing falsetto and love for inviting audience members on stage. Other  Better than Ezra hits include “Desperately Wanting” and “Extra Ordinary.” Kevin has had #1 hits writing songs like “Collide” for Howie Day, “Stuck Like Glue” for Sugarland, and “Scars” for Missy Higgins.  He has also written songs with Taylor Swift, David Guetta, Christina Perri, James Blunt and Train just to name a few.

The lead singer and songwriter of the alternative rock band Tonic, Emerson Hart, has achieved multi-platinum success with hit songs “Open Up Your Eyes,” “Take Me As I Am,” and “If You Could Only See.” With Tonic’s six top 10 singles, 4 million records sold, multiple Grammy nominations, and multiple platinum albums, Hart is a musical force that captivates audiences again and again.

The sun is setting on your chance to attend CAHR19

Grab your seat and save $$$ compared to national conferences!

With 70+ HR learning sessions, 9 education tracks, 16+ recertification credits, a venue walking-distance from the beach, buffet lunches, and four-days jam-packed with high-profile entertainment, CAHR19 gives attendees the most value for each conference dollar as our rates are competitive against national conferences. We hope you’ll join us for a meaningful professional development experience that amplifies and elevates the HR field.

Add CAHR19 to your calendar and register today!