Strategies to Create Inclusive Teams with a Fair Pay Structure

Addressing Pay Equity From The Ground Up with Parag Vaish

Did you know the first recorded awareness of pay inequity in the U.S. dates back to February 1869? Women federal employees received 50% of men’s salaries for the same work. Since then, decades of increased awareness, strikes, and legislation like California’s recent Ban The Box bill have brought real change. Over time, we’ve worked to create new structures to make corporate compensation more objective and unbiased, and provided more opportunities for employees based on their skills rather than gender, ethnicity, sexual orientation, or religion.

That specific discrepancy in the federal government was remedied in 1870, but it wasn’t until 1963 when President John F. Kennedy signed the Equal Pay Law into effect. Nearly 60 years later, women make 79% of what men make for the same work.

Pay equity should matter to everyone – and there’s a chance you have more to learn about it. (We sure did – see our first question below.) For employers looking to reduce turnover, compensation is a major factor in employee engagement and talent retention. How do you ensure your employees feel valued? Expressing appreciation in your company’s culture is meaningful, but how you develop and communicate your organization’s pay process can enhance employee satisfaction.

There’s still a long road ahead to reaching true equity in talent management and compensation. However, if you’re anything like Parag Vaish, you’ll know the best time to make a more equitable workplace is now! Not only is it wildly overdue, it is also wildly possible.

We’re so excited for Parag’s CAHR20 session because he has demonstrated what a leader in this space can achieve. In his career at Tesla, athenahealth, and Google, Parag has achieved monumental results in his efforts to reduce bias in hiring and compensation practices, increasing representation from underrepresented populations in the technology sector, and closing the wage gap entirely on his team at Tesla.

To learn more about Parag and why he’s excited to present at the 2020 California HR Conference, we asked him a few questions below.

Read on and be sure to sign up for your CAHR20 Early Bird Ticket before prices increase October 16! 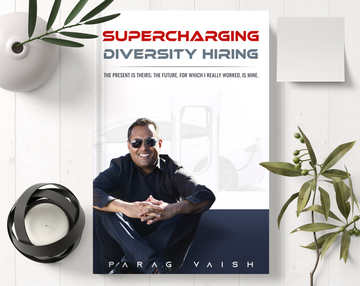 Why See Parag at CAHR20?

Parag Vaish is Founder-in-Residence at Google’s Area 120 incubator. Parag is an innovative leader in the field of digital product management and design. He has an extensive track record of success in both product and business roles. Parag has helped industry giants like the Walt Disney Company, Microsoft, NBC News, StubHub!, athenahealth, and Tesla as well as innovative startups like Escapia (acquired by HomeAway) exceed their annual goals. Parag’s unique mixture of team leadership skills, emphasis on quantitative analysis and his overall vision make him an industry leader in his field. Parag is currently a Founder-in-Residence at Google in the Area 120 group after transitioning from his position as Head of Digital Product Management, Content & Design at Tesla. You can read more about Parag’s distinctive Team Decision Matrix model, developed while at StubHub! and refined at other companies, in his recently released book, “How to Rank and Prioritize Nearly Anything” which is now available on Amazon. Parag Vaish earned a Bachelor of Science, Business Administration, at California State University, and an MBA and M.S. in Information Systems at Boston University. Parag’s passions include speaking about product management, accelerating the growth of early-stage companies, market validation of new product introductions, gender diversity and inclusion, people development, data-driven decision making and maximizing resource efficiency.

Without further ado, here is our interview with CAHR20 Presenter Parag Vaish!

CAHR20: Fair Pay has been a widely discussed topic for quite a few years now, so why are organizations still struggling to properly implement it?

Parag Vaish: Equitable Pay is a phrase I prefer over Fair Pay. I believe organizations are struggling with this because the entry point for a candidate, into a company, is typically based on your compensation trajectory or your last wage rate (rather than the pay range for the job being offered).

I’m sure you’ve all heard the question in interviews…”What are you expecting in terms of compensation?” Inherently, this question is seeking the compensation numbers from the candidate rather than the pay range of the role in question.

Until companies define the role attributes, and then the level and associated compensation for the level, we’ll continue to have a male and female employee being paid differently for the same job. Keep in mind, I am not a compensation or HR professional, so this is just my operating manager viewpoint.

CAHR20: What sparked your commitment to driving change around equitable pay and diverse teams?

PV: I’ve actually written a book on this exact question. It can be found here. The short version is that I’ve grown up trying to fit into a world where I often felt different than others, I went to schools where I felt disadvantaged relative to brand name schools and I like to consider myself one who is willing and able to challenge the status quo. This makes for the perfect cocktail of attributes to take on the topic whenever I am in a position of influence.

CAHR20: What are the biggest challenges you’ve seen leaders in HR face when trying to implement more equitable compensation programs?

PV: Managers are often unwilling to partner closely with their HR business partner, recruiting team and compensation team to create holistic change. Often, managers are functional experts such as Engineering Lead, Design Lead, Finance Lead, etc where what they know best is their domain and they defer topics of diversity and pay equity to those who are in the HR roles. It starts with hiring managers having an interest in solving the problem. Now let’s suppose you have the interest and support from HR. The next challenge is going to be ensuring that you are setting a framework in place to allow for diversity to be woven into your hiring decisions in a natural way versus something which appears forced. If you are doing unnatural acts to shoehorn diversity into your organization, it may not go well. If you have the luxury of looking ahead towards growing your team by more than three people (remember, my experience at Tesla was taking a team from 8 to 43 people), then you can start to visualize what attributes, skills and team composition that you’d like like the collective team to have once they are fully hired. There are probably 8-10 more challenges one might face,but I’ll cover those in the Q&A session.

CAHR20: Without giving away too much, why should CAHR20 attendees see your presentation?

PV: My story is somewhat unique in that the gender pay equity and diversity results on my team at Tesla were not as a result of a company mandate nor was it HR driven. It was initiated by me. Many speakers on this topic are coming from the HR perspective whereas my trade is Product Management and Design. So, for any HR professionals, functional department heads, CEO’s, etc who want to hear how a lone divisional leader addressed equity and diversity, without it being prescribed to them, this session will offer a detailed account of what I did, what I was surprised to learn and what I would do differently next time.

Thank you for your time, Parag!

Your time and budget are especially precious these days. That’s why we designed the Virtual CAHR20, happening October 27-29: a compact, 3-day live event featuring the top minds from a variety of industries, providing you with a whopping 30+ HR recertification credits.

Plus, CAHR20 attendees get early access to complimentary weekly HR content & credits with our PIHRA Road to CAHR20 Webinar Series every Monday at 2:15pm!

Until October 16, 2020, you can take advantage of the CAHR20 Early Bird Rate to secure excellent HR professional development – including Road to CAHR20 Bonus Sessions – at a reasonable cost.